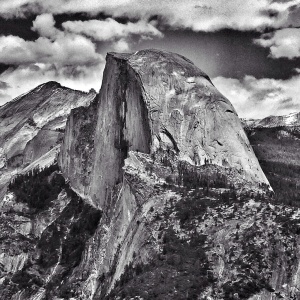 Half Dome, captured with the iPhone camera, as seen from Glacier Point

Although we saw Yosemite’s iconic Half Dome on our first visit to the valley, we didn’t really appreciate its grandeur until we trekked to Glacier Point.

Arriving at the point, we were quickly overwhelmed by Half Dome’s immediacy and enormity. The imposing granite crest was offset by a cloud-filled blue sky above a carpet of evergreens nearly 5,000 feet below. We felt, to quote the great naturalist John Muir, “absorbed” in the great edifice, “her crown a mile away in the hushed azure; her purple granite drapery flowing in soft and graceful folds…embroidered gloriously around with deep, shadowy forest.”

The “half” in its name is actually a misnomer. From the perspective of Glacier Point, it’s clear that as much as 80 percent of the dome remains. But “Eighty Percent Dome” doesn’t have the same ring.

The distinguished photographer Ansel Adams called Half Dome a “brooding cliff,” and described photographing it as “one of the most exciting moments” of his photographic career. It was that–and more–to us. We not only photographed the mighty giant, we also picnicked within view and listened to awe-inspired comments in French, German, Japanese and other languages from around the world.

One comment to the National Parks Service: Dedicate some funds to improving the toilet facilities. For Half Dome’s grandeur is surpassed only by the wretchedness of the public restrooms. We left the park feeling more than a little embarrassed by our nation’s inability, after 150 years, to find an appropriate solution to the sewage problem.