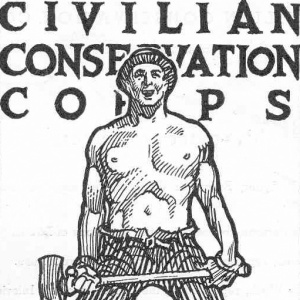 We’ve been trying to decide on a focus for our travels. Cliff loves the lure of a lighthouse. Should we make lighthouses our destination? Jon is enamored with National Parks. It’s nearly impossible to see them all in a lifetime, but maybe a goal could be those in the West?

As we debated the possibilities, we unexpectedly came across a focus for our travels: the Texas State Parks built during the 1930s by the Civilian Conservation Corps (CCC). Unbeknownst to us, we already visited one such park at Palo Duro Canyon. Thanks to the Depression-era New Deal, the CCC laid the foundations for today’s Texas park system.

The CCC was a public work relief program for unemployed, unmarried men between the ages of 18 and 25 that provided unskilled manual labor jobs related to conservation and development of natural resources in lands owned by federal, state and local governments. During the CCC’s nine years of activity, more than 3 million participants planted nearly 3 billion trees, helping to reforest America. They also constructed more than 800 parks nationwide, including more than 50 in Texas, and updated service buildings and public roadways in remote areas.

The men lived an almost monastic existence, earning about $30 a month, along with shelter, clothing and food. In fact, many of today’s existing CCC parks have refectories, in addition to dormitories and exercise pavilions. In addition to helping young men support their families during the Depression, the CCC also led to greater public awareness and appreciation of the outdoors and America’s natural resources.

In Texas, more than 50,000 CCC enrollees not only built our Texas park system, but also improved their physical condition, morale and employability.

We’re excited that we’ll be joining the Heart of Texas Camping Unit of the WBCCI for a weekend at Meridian State Park in September, our second sojourn to a CCC state park.