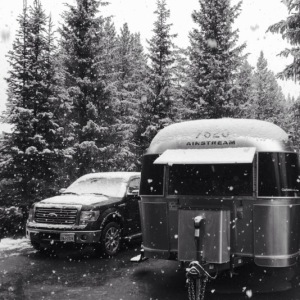 We left Yellowstone National Park two hours ahead of plan, thanks to an unexpected snowstorm. Heavy, wet flakes fell at about an inch an hour, quickly covering everything in a blanket of wintery white. To complicate matters, we learned that our intended route out the East Entrance to Cody had to change because a rock slide had shut down the highway. So we packed quickly and headed to the South Entrance. Consequently, we were able to experience Yellowstone in it’s spring and winter apparel. What a wonderland!

Our full day of driving was highlighted by a bear sighting just outside of Grand Teton National Park. The big brown bear ambled right across the road in front of our truck, and then turned back to look at us for a photo op.

We took advantage of the long hours of drive time to learn more about Wyoming and the unique relationship between the tribal government of the Wind River Indian Reservation and the state. Our route took us through the reservation, which is home to about 8,000 Eastern Shoshone and Northern Arapaho. Wyoming itself is a sparsely populated mountainous state with bragging rights to a lot of firsts. In addition to having the world’s first national park, it also was the first state to extend the right to vote to women. Women first served on juries in Wyoming. The first female bailiff and justice of the peace served in Wyoming. It may come as no surprise, then, that the state was also the first in the nation to elect a woman governor, in 1924.

Day 6 of our Yellowstone Adventure found us passing Crowheart Butte, the site of a five-day battle in 1866 between the Crow and Shoshone tribes to determine which tribe would have rights to the Wind River hunting grounds. According to legend, Chief Washakie of the Shoshone and Chief Big Robber of the Crow agreed to decide the battle with a duel. Chief Washakie prevailed, but was so impressed by his opponent’s courage that instead of scalping him, he cut out his heart and placed it on his spear. Hence, the name, Crowheart.

After driving through several storms, we finally rolled into our campsite outside of Casper at around 8:45 p.m., weary and hungry. Fortunately, Cliff had prepared an excellent bolognese in advance, so we were able to enjoy fine supper in short order.

Several lessons we learned along the way are worth sharing:

First, there’s no such thing as “delicious” at a truck stop. Don’t fall for the marketing message.

Second, a rolling cart in a campsite laundry is a very good thing.

Third, heavy rain will make a travel trailer wet but it won’t make it clean.