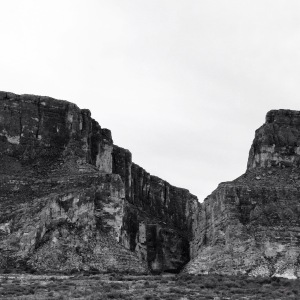 After Jon spent more than two hours tying up loose ends at work, we were finally ready to set out for Big Bend National Park. Our Day 1 destination: Mule Ears, Castolon and Santa Elena Canyon — among the park’s most iconic sites.

First, we stopped for lunch at Rio Bravo, a Terlingua cafe that featured authentic Chihuahuan cuisine. Cliff enjoyed a chile relleno and Jon filled up on tacos. A group of local teenagers had gathered there to celebrate someone’s birthday. Let’s just say it was quite different from how teenagers observe birthdays in Dallas.

As we embarked on the Ross Maxwell Scenic Drive in the western area of the park, we encountered the Mule Ears formation, twin pillars of black igneous rock that were once part of the core of a volcano. Most  of the land surrounding them is undulating, stony hills with sandy ravines, all covered by well-separated desert plants. Prominent among the plant life is the ocotillo — not a true cactus, but a spiney plant with thorny stems that thrives in the Chihuahuan desert.

From Mule Ears, we traveled to Cerro Castellan (or Castolon Peak), a butte capped by remnants of an ancient lava flow overlying volcanic ash and stream deposits from the Chisos Mountains. The butte is located near the former Castolon settlement, a village that served the nearby mining communities.

In 1901, Cipriano Hernandez started the first store in Castolon, operating it out of his home. Today, his home is known as Alvino House (named for Alvino Ybarra, who lived there with his family from 1918 to 1957), and is considered the oldest adobe structure in Big Bend National Park.

The adjacent Castelon Visitor’s Center is housed in a former National Guard barrack building, which was constructed in 1919 to house troops stationed near the Mexican border during the Mexican Revolution. Although it was never occupied by troops, the building became a company store, and served as a frontier trading post until it was acquired by the National Park Service in 1961 and converted to a concession operation.

But first, a side note. When we first decorated Cloud 9, we placed framed reproductions of three WPA National Park posters on the wall in our hallway. Originally produced in the mid-1930s, the posters depicted Sequoia, Yellowstone and Big Bend national parks. We saw the Giant Sequoia during our visit to Yosemite last year. We visited Yellowstone in May. So only Big Bend remained to be seen. And the scene depicted in the WPA poster of Big Bend? Santa Elena Canyon.

Located six miles from Castolon, the majestic Santa Elena Canyon is one of the most impressive sites in Big Bend National Park. The canyon separates limestone mesas originally deposited as sediments of an ancient sea that covered the area millions of years ago. With passages as narrow as 25 feet and sheer walls reaching to 1,500 feet, the canyon may have been an obstacle to early explorers but is now a popular recreational spot.

In a word, it was spectacular — a perfect mix of drama and serenity. We were awestruck by this natural wonder as we considered how the Rio Grande had carved it over thousands of years.

A brief stop at a Terlingua grocery store on our way back to Cloud 9 allowed us to pick up a few necessities, and end our evening with a dinner of grilled chicken and anaheim peppers.