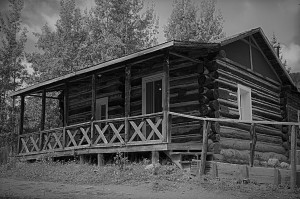 A bright, mild Wednesday seemed an ideal time to visit Grand Lake, Colorado’s largest and deepest natural lake, situated at the park’s western entrance. The lake fills a valley formed by a glacier about 12,000 years ago, with one side dammed up by glacial sediment.

It was originally named Spirit Lake by the Ute Tribe because they thought its cold, deep waters were the dwelling place of departed souls. Because the lake and the eponymous town at its shore lie outside the boundaries of the national park, the area has been subject to hideous commercial development as locals vie for tourist dollars. We spent all of about 10 minutes there before retreating to the safe confines of the national park.

As we traversed Trail Ridge Road, we stopped at the Holzwarth Historic Site, about eight miles from Grand Lake. A German immigrant, John Holzwarth, moved to the Kawuneeche Valley in 1917 after his job as a saloon-keeper came to an end with Prohibition. He moved his family to the upper Colorado River at the foot of the Never Summer Mountains to build a homestead and start a cattle ranch. Soon, he and his wife, Sophia, decided to open a guest ranch, which they called the Holzwarth Trout Lodge.

As tourism to the newest national park grew, the Holzwarth family began developing a dude ranch, which became known as the Never Summer Ranch. “Never Summer” is from the Arapaho, “Ni-chebe-chii,” which translates to “Never No Summer.”

The first building at the site is an old miner’s cabin which now serves as an interpretive center. Built in 1902 by Joseph Fleshuts, it serves as the gateway to the Holzwarth compound. We crossed the Colorado River en route to the historic site, taking in sweeping views of the Kawuneeche Valley, where the dude ranch once stood.

The Holzwarth property is anchored by the main cabin, known as Mama’s Cabin (pictured), and several other buildings, including an ice house, a taxidermy shop, a barn, and smaller lodges. The family owned the property until 1974, when a 71-year-old John Holzwarth Jr. sold it to the Nature Conservancy for $1.4 million. One year later, the Nature Conservancy transferred the property to Rocky Mountain National Park.

Although Holzwarth had been approached by commercial developers with far higher bids, he wanted the valley “to be for all and not a select few.” Today, we were among those who benefited from “Johnny’s” decision.

As we climbed to alpine heights, we were engulfed by a rainstorm. Temperatures dropped 20 degrees and rain soon turned to sleet, making for treacherous driving conditions on hairpin turns. As we approached Rainbow Curve, we were astonished to see the most vibrant rainbow spanning the valley below. Truly magical!

Along the way, we learned several lessons worth sharing: